The Director of the Princeton Early Keyboard Center is organist and harpsichordist Gavin Black. Gavin Black is best known for his recordings of seventeenth-century keyboard music on the PGM label. He studied organ and harpsichord with Paul Jordan and Eugene Roan, and conducting with Jahja Ling and Otto-Werner Mueller, and attended Princeton University and Westminster Choir College. He served as Associate University Organist at Princeton from 1977 to1979, while a student there, and was Organist and Senior Choir Director at Hillsborough Reformed Church, Millstone, New Jersey, from 1988 until 1994. He has been a teacher of organ, harpsichord, clavichord and continuo-playing since 1979, teaching from time to time at Westminster Choir College and at the Westminster Conservatory of Music. He currently writes a monthly column on organ and harpsichord teaching for The Diapason.

As a performer, Gavin Black has focused on 17th-century keyboard music, especially music of Dutch, German, or Italian origin, and on the organ music of Bach, which he has performed in its entirety. In the year 2002 he performed Bach's Art of the Fugue on the new organ at the Princeton Theological Seminary, and elsewhere. His recording of harpsichord music of Sweelinck, played on a Philip Tyre copy of a Ruckers transposing double was released in 2006 by Centaur Records and his recording of music of Frescobaldi played on a 17th century Italian harpsichord will be released in 2020. Gavin Black has also specialized in the music of the 20th-century American composer Moondog, recording a selection of his harpsichord music for the Musical Heritage Society in 1978. He has made a specialty of Bach's Art of the Fugue, and has recently recorded that work in a version for two harpsichords, with George Hazelrigg (see The Art of the Fugue.com). In 2021 Gavin will be performing The Art of the Fugue in concert as a solo harpsichord work.

(Gavin Black can be reached at gavinblackbaroque@gmail.com) 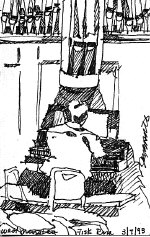 Gavin Black at the Fisk organ at Westminster Choir College, 1995